Welcome to the island of Eleuthera! It really is better in the Bahamas, and we’ve provided you with some information about the area in and around Governor’s Harbour.

The island of Eleuthera is considered to be one of the prettiest islands in the Bahamas, with its rolling green hills, sheltered coves, breathtaking bluffs and cliffs, inland lagoons and caves, and magnificent pink sand beaches that stretch for miles. The island is over 110 miles long but little more than a mile wide in most places – in certain spots on the island you can see the deep blue Atlantic Ocean and the calmer, aquamarine Bight of Eleuthera at the same time.

Eleuthera, located at latitude N25°, has pleasant weather virtually all year long. Summers bring southeasterly breezes which keep the island cool with temperatures generally around 90° during the day and the mid- to upper-70’s at night. Winter finds Eleuthera with winds out of the east/northeast and temps are generally in the low- to mid-70’s during the day and the 60’s at night.

Outdoor activities are a year-round adventure in Eleuthera. With rolling hills, bike-riding and running/walking provide a challenge to moderate athletes, while the beaches that extend for miles provide a foraging ground for avid beachcombers and shell collectors alike. The crystal clear waters call its visitors to explore the reefs and waves with snorkeling, diving, fishing and (yes) surfing. The flora of the island is home to a myriad of birds, providing ornithologists with hours of enjoyment. In Eleuthera, you can fulfill your sense of adventure with a variety of activities.

The island of Eleuthera is divided into three main regions: north, central and south. The north is home to ocean side cliffs, carved out by hundreds of years of wave action, and the islands of Spanish Wells and Harbour Island. Spanish Wells is known for its keen fisherman and boat builders and also boasts some of the most accomplished quilters in the country. Harbour Island is renowned for its 3-mile pink sand beach and the quaint colourful Dunmore Town. The Glass Window Bridge spans north from the main island of Eleuthera and leads to Gregory Town, home to Surfers’ Beach with its world-class waves that attract surfers from around the world. Alice Town/Hatchett Bay has one of the best protected natural harbours and is home to the Hatchett Bay caves. James’ Cistern sits along the Caribbean shore and on Fridays and Saturdays you don’t want to miss Billy Stubbs’ lunchtime Bar-b-que.

Governor’s Harbour is located in the central region of Eleuthera on the southeastern side of a natural land spit called Cupid’s Cay. Governor’s Harbour is home to the local government seat, with its historic Haynes Library. Palmetto Point sits across the island nestled between the Atlantic and Caribbean sides. Savannah Sound is home to the famous Windemere island, which boasts royalty as some of its famous visitors.

Tarpum Bay sits on the calm Caribbean side and is home to an artist’s colony and a trip to the docks at mid-day will provide you with some of the best fresh fish for grilling the island can provide. Rock Sound, home of the Cotton Bay Club and boasting its own airport, has an inland blue hole that provides a great place to snorkel, or just to feed the fish. Cape Eleuthera is home to the famous Island School, which is self-reliant, providing energy through the use of wind and bio-fuel technology and food production using hydroponics. Driving south of Rock Sound, one can venture down to Lighthouse Beach at the most southern tip of the island, passing through quaint little settlements such as Millar’s and Bannerman Town. 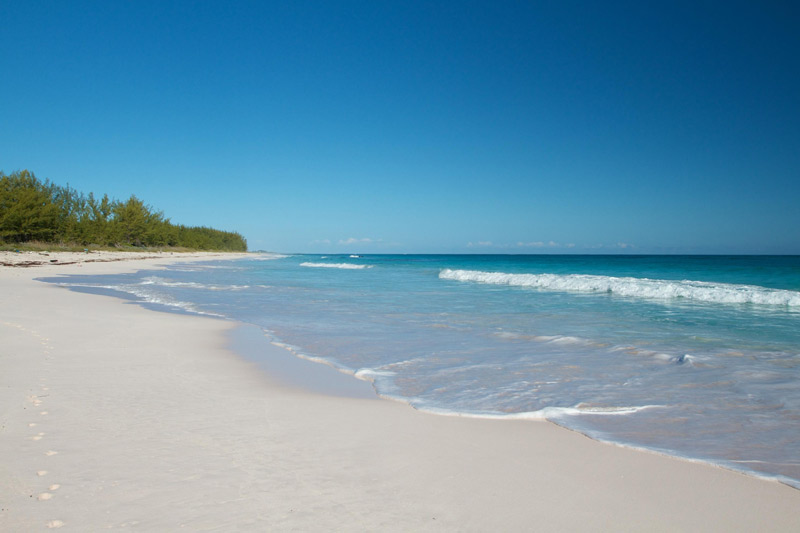 With more than 100 miles of coastline on either side of Eleuthera (Atlantic and Caribbean) there are so many beautiful beaches to choose from that you will not have enough time in a single visit.

The beach at our house is one of many scattered around the island.

At low tide you can walk for miles in either direction and many times only see the footprints in the sand from your own footsteps. With slowly recovering reefs right off our doorstep, the new growth is beginning to attract small fish, as well as pompano that will swim right up to you to investigate! 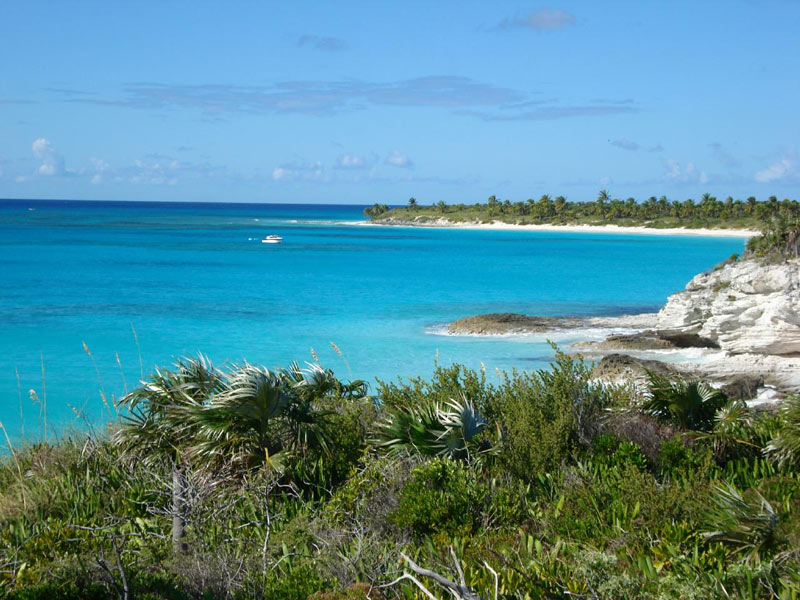 The southernmost tip of Eleuthera is well worth the ride. The beaches stretch from the Atlantic around the point to the calmer waters of the cove. There is much to explore, including the remains of the old lighthouse, alongside of the new, unmanned lighthouse. The survey marker can be seen if one is brave enough to climb the top of the rock at the point.

Pack a picnic lunch, a blanket and the umbrella and you can make a day of it on this lovely beach, shelling and exploring or just relaxing under the getly swaying palm trees.

Double Bay Beach is one of the finest on the island. It is not coincidence that famous celebrities have homes here. The beach is five miles long, very sandy, and wide. It is located on the Atlantic side of the island, just north of Savannah Sound and Palmetto Point. 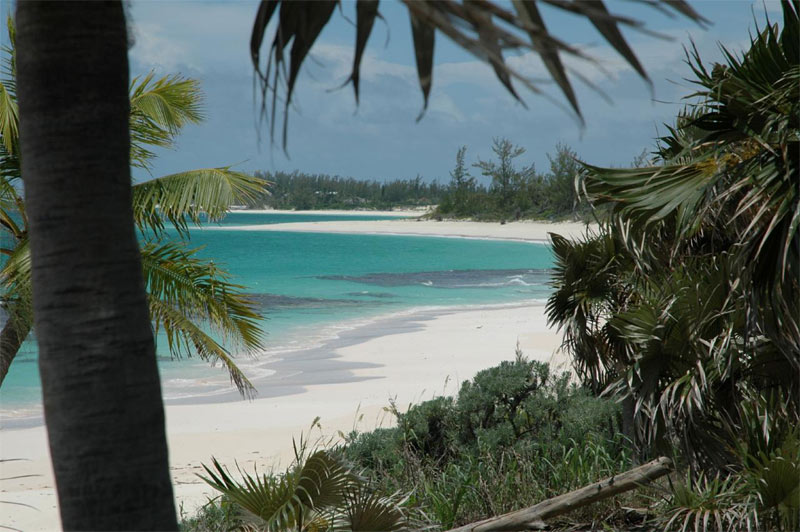 There are a many good places to go out to eat in the area.

Beach House Tapas Restaurant
On Thursday nights you can catch live music with the Queen’s Highway Band. You never know who will show up to jam with the locals! Beach House Tapas is located on Banks Road in Governor’s Harbour right on the famous French Leave Beach (aka Club Med Beach). 332-3387

Tippy’s on Bank’s Road
Everyone visits Tippy’s bar & restaurant located on an Atlantic beach between Governor’s Harbour and North Palmetto. We particularly like the open-air ambience of Tippys. And the view of the beach to the north is spectacular! You can hear live rake-n-scape music with Elliot and his band on Saturday nights. Phone: 332-3331

New Sunset Inn
Located at the edge of Governor’s Harbor (Caribbean side) on the water, the Sunset Grill is the creation of local legend Lionel, who is noted for being a big fan of Muhammed Ali and James Brown. Sunset in is located right on Queen’s Highway. 332-2487

Mate and Jenny’s Pizza Restaurant
Mate and Jenny’s is known for its conch pizza, has a jukebox and a pool table. It’s the most popular local joint, completely modest and unassuming. In addition to pizza, the Bethel family prepares pan-fried grouper, cracked conch, and light meals, including snacks and sandwiches. Lots of folks come here just to drink. Try their Goombay Smash, a Rum Runner, a piña colada, or just a Bahamian Kalik beer. Mate and Jenny’s is located in South Palmetto Point just off the Queen’s Highway and features pizza and main courses between $6 and $30. (332-1504) http://thebahamian.com/matejen/

Billy Stubbs’ Bar-B-Que
Brenda & Billy Stubbs are a dear couple who have a charming BBQ operation called “Under the Tamarind Tree”. Most Fridays and Saturdays (weather permitting) they are open starting at 11:00 am – 3:00 pm. They serve fresh local Bahamian cuisine in carry-out, take-home cartons. They serve tasty BBQ ribs, chicken, peas and rice, mac & cheese, potato salad, coleslaw, pop, and desserts, etc. They are located in James Cistern off of Queens Highway on the same side of the street as Bethel’s Barn Bargains–look for the BBQ sign. 335-6111

Some of the restaurants on the island do feature live music, so stop by and listen to the tunes!